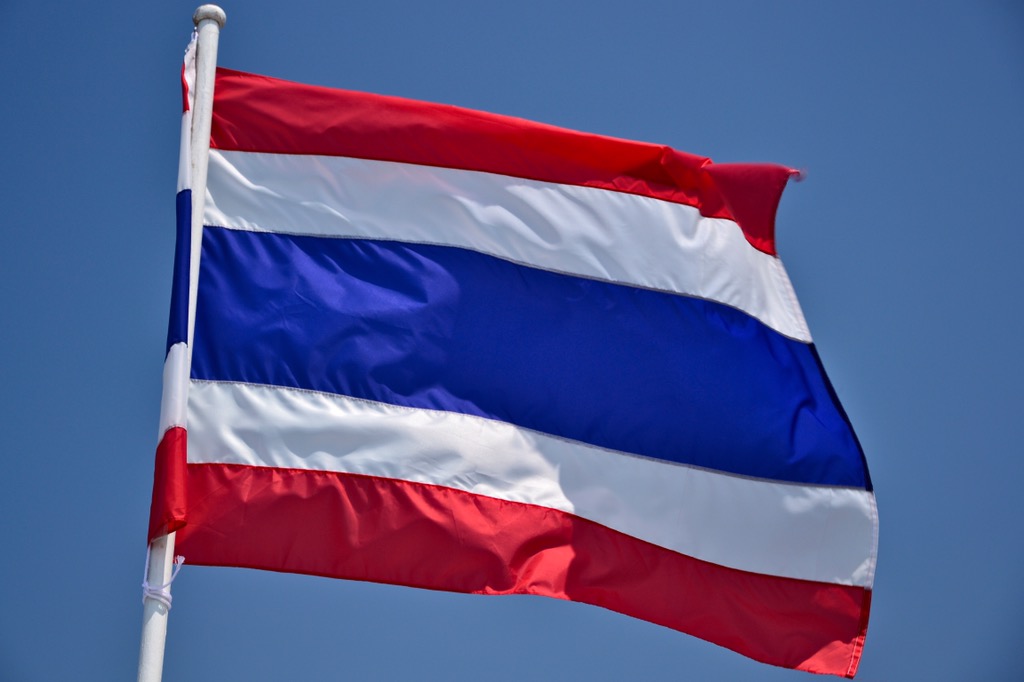 We have integrated Thailand in our all around the world trip during the refinement of the route in order to have a more convenient transfer from Laos to Myanmar. Arriving in the North of Thailand via boat from Laos, a 24 hours long journey to get from Chiang Mai to Bangkok started. Since the direct bus to a central train station in Chiang Mai was already booked out, we had to take an alternative route. Therefore, we had to take a local bus to Chiang Rai in the West of Thailand and then to take a more touristic bus to Chiang Mai. Read on to get some of our travel tips for Thailand.

The day didn’t start promising. The ordered Tuk Tuk was not showing up at all. In addition, no other Tuk Tuks were available on the road due to the early morning. Thanks to our hotel for taking us to the bus station on time. Amazing but the local bus was driving the around 90 km in 2.5 hours but arrived exactly on time. And this despite taking up passengers at every corner. We were lucky catching the pre-booked connecting bus to Chiang Mai.

Arrived there, we had to hurry up to buy tickets for the night train to Bangkok. The reason for the hurry was because a pre-booking of the train tickets is unfortunately not possible. Therefore, the tickets are sold following first come, first serve. In total, we had a very lucky day.

Arriving in the early morning in Bangkok we were well rested and started immediately with our exploration tour. We made the whole tour by foot but of course it is possible to take a tuk-tuk or some buses. There are plenty of it at very low costs.

Bangkok’s most important landmark is the Grand Palace consisting of more than 100 buildings from different architectural styles. The Grand Palace includes a Buddhist temple with an emerald Buddha statue. We have not expected to udergo such high security measures. In order to get into the area of the Palace we had to hold our passports in front of us and into the camera.

Thailand’s king died in October 2016 and the one year mourning period is still ongoing what we have not only recognized through the many people dressed in black at the entrance of the Grand Palace but also through the many pictures of the king with black colored draperies – even the first screen at the ATM shows the king’s portrait. 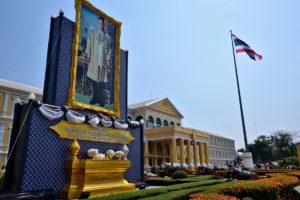 Bangkok has around 400 Buddhist temples but after nine weeks in Asia, we are getting tired of visiting temples and all the Buddha statues. So we have decided to only visit two of them. The Pho temple close to the Grand Palace includes a huge covered with gold leaves reclining Buddha. On the other side of the river, the temple Arun is located. The pagodas look amazing due to the all over decoration with colored glass stones.

On our second day in Bangkok we took a train to visit the ancient capital Ayutthaya. The historic city of Ayutthaya which was founded around 1350 is one of Thailand’s UNESCO world heritage site. Ayutthaya lies around 60 km outside of Bangkok. The ordinary train needs 90 minutes. But the price is unbeatable: 50 cents per person. Okay, it is the price for a third class ticket but there are normal seats (no wooden boards) and without air condition since the windows remain open during the journey.

On our way back we caught a train that runs 120 minutes and consequently costs even less: 35 cents 😉 All trains we have taken were on time but in case it would not have been the case, we would have taken the chance to go to the hairdresser which is directly located at the beginning of the track.

Arrived in Ayutthaya we rented bicycles to explore the huge area with ruins of Thailand’s ancient capital. Ayutthaya was founded in 1350 and along with a long history of violence Ayutthaya was overthrown by the Burmese army in the mid of 1700. It is said that the gem and gold can be now seen in the pagoda in Yangon what we will explore further in the next next two weeks visiting Myanmar. 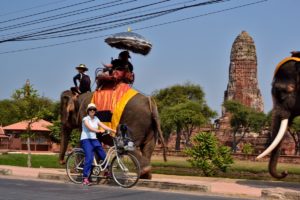 Probably the most popular relic of Ayutthaya is the head of Buddha wrapped within the tree roots. Its Buddha can be found in Wat Phra Mahathat temple. The Buddha statue was destroyed and the head fell to the ground and tree roots grew around it.

The largest temple in Ayutthaya is Wat Phra Si Sanphet with its three distinctive stupas. 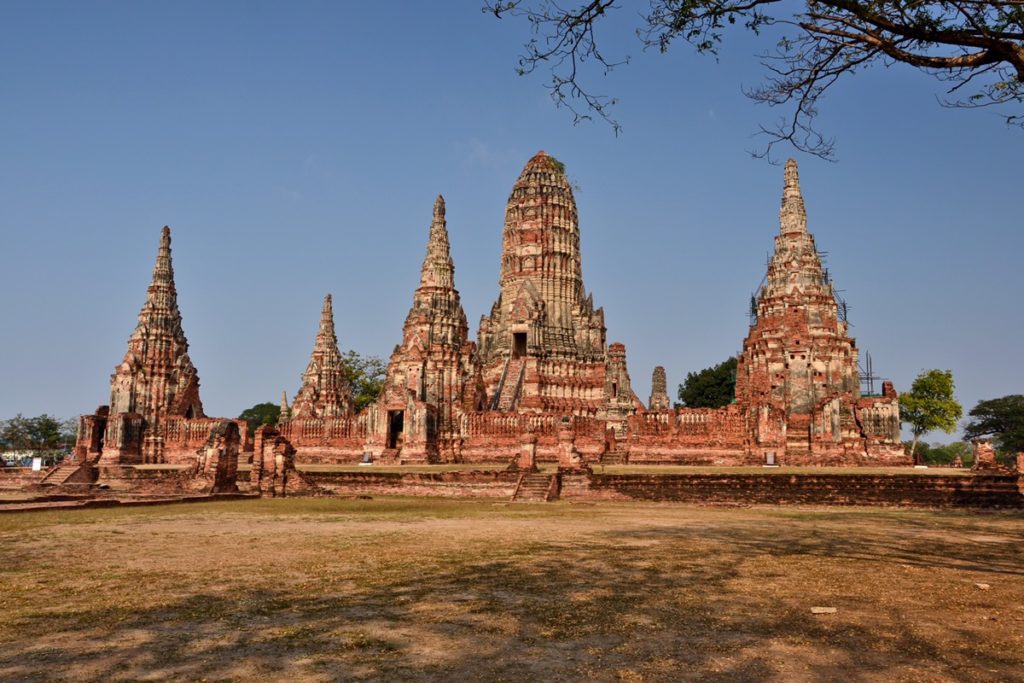 Outside the center of the temples lies Wat Yai Chai Mang Khon with rows of Buddhas and a giant reclining Buddha dropped in safran colored robes.

Since we were visiting several countries from the golden triangle, we have bought a combined travel guide for this region which also holds good travel tips for Thailand.

If you want to get more into the Thai society, you should read Monsoon Country by the Nobel Prize-nominated author Pira Sudham:

Continue reading our most popular blogs: