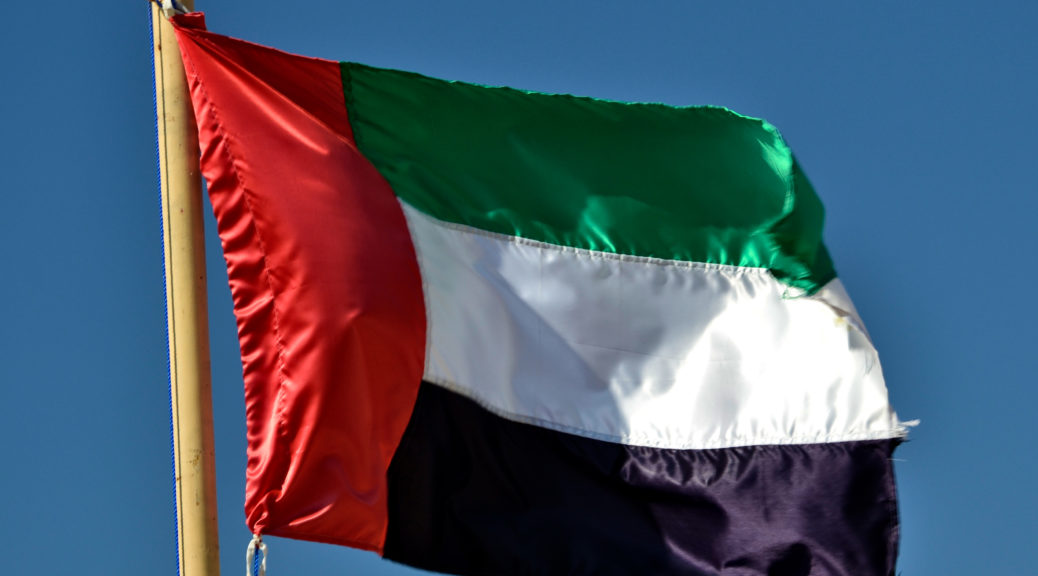 For the festival Christmas season 2018 we decided to do a tour in United Arab Emirates and Bahrain due to our very positive experience of Oman. Of course, United Arab Emirates are not so originally like Oman was but we were curious what hidden places <nd of course UNESCO World Heritage places we could discover.

The Unites Arab Emirates (UAE) allow driving a rental car without an European driver license. Consequently and together with the fact that many international rental car companies have locations in UAE it is very easy to get a rental car. We started in Dubai and returned the car in Abu Dhabi to fly to Manama in Bahrain afterwards.

We enjoyed driving around in the United Arab Emirate (UAE) due to the possibilities to stop everywhere and the empty roads.

Our travel tips for United Arab Emirates by car

In Dubai as it is famous for its unbelievable skyscrapers we have taken directly the elevator up to the viewing deck at Burj Khalifa. Due to its height with 828 meters, the view on Dubai is really fascinating. Everything from the viewing deck of the Burj Khalifa in a height of 456 meters (124th level) looks like being part of a city built of Lego. The elevator only takes 55 seconds from the ground to deck 124. Remind of booking a ticket for the entrance in advance to be sure that you can visit.

Walking from the Burj Khalifa to the Jumeirah Hotel Dubai required a lot of discipline to not cave in taking a taxi. Each couple of meters another taxi stopped and asked us to take us wherever we want. Walking seems not be something that is normal in the United Arab Emirates.  From there we walked over to The Walk, JBR to enjoy the Christmas market with a kind of snow.

Just some kilometers from Dubai city center away on our way to Ras Al Khaimah, we visited the King Faisal mosque. The mosque lies in a very quiet and traditional area and we felt a bit unwell of being a tourist. Therefore, we just visited the mosque and cancelled our plans to walk around in the area.

Dhayah Fort was build in the 18th-century and is located near to Ras Al Khaimah. It is the highest hilltop fort in the UAE and worth travel due to the fantastic view over the area. Stairs were built to facilitate the visit during the summer time. Even in December we covered our head against the sun.

We have visited the Fort Al Hisn with its national museum. Some of the buildings were just built in the last century. The temperature inside the fort is due to the construction just perfect with a little wind.

60 km before Fujairah City lies the small town Dibba. Many houses are built in the traditional arabian style that reminded us of Oman. From the port in Dibba we had a view into Oman’s enclave Musandam.

Fujairah is a relatively small town so that we left our car at the hotel and walked through the city. The wealth of the city is mainly driven by the dates export. We have visited the Fujairah Fort on a hill. This fort was built in 1670 and was home to the Emir.

In addition, we visited (but only from outside) the central mosque (Sheikh Zayed mosque) of Fujairah.

In Al Ain the color of the nature is completely different to the desert we have seen so far: there are so many green parks, gardens and palm groves. This is the reason why Al Ain is also known as “garden city”. The reason are the more than 3000 years old Falaj water system that brings the water from the mountains to the oasis. Skyscrapers are not allowed in Al Ain – the maximum height of buildings is set to six levels – to safe the cultural heritage. More than 1 million dates palms do exits within the oasis in Al Ain. The modern style of UAE is visible allover the city with streets of six lanes and the new governmental buildings however the cultural states of Al Ain (UNESCO World Heritage) and the camel market has been remained.

One of the oasis lies directly in the city center next to the national museum. The oasis is kept alive by the Falaj water system.

Just some kilometers from the central oasis away, we walked by a traditional souk. This souk is also selling the dates.

This one of the last camel markets in VAE and that’s the reason why more than 1,000 camels are sold everyday – or better said one-humped dromedaries. We spent several hours walking around and also have seen how the camels are then transported after a deal.

On our way from Al Ain to Abu Dhabi we made a short side trip to the Empty Quarter. The amount of this golden sand is incredible – it was in tons around us – everywhere.  It is the largest continuous sand sea in the world, with an area of 650,000 square kilometers. The Al Rub’ Al Khali desert is shared by four countries: Saudi Arabia, Yemen, the United Arab Emirates and Oman.

Our last stop in the United Arab Emirates (UAE) was Abu Dhabi. Compared to Dubai it is a more relaxed with a higher focus on traditions and culture. Due to the massive oil and gas occurrence in Abu Dhabi the tourism is just built up as a second economic pillar with museums (dependence of Guggenheim and Louvre museum, national museum designed by Norma Foster) and with the CO2 neutral city Masdar new technologies and renewable energies are pushed forward.

More about the traditional way of life shows the Heritage Village on Breakwater Island. The workshops of the souk show the wood, metal and weaving work and you can have a look into a Bedouin tent.

From there we had a beautiful view on Abu Dhabi’s skyline.

The lobby of the luxury hotel Emirates Palace is open to the public. Entering the entrance hall it looks like in a fairy tale of 1001 nights since almost everything is made of gold. This also holds true for the cappuccino that is served with gold leaves in the café in the basement.

Our hotel was close to the Sheikh Rashid Bin Saeed Street we walked each evening along the Corniche. The Corniche is in total 7 kilometers long. Here and in the monuments park from our hotel to the Corniche we found these giant monuments of Arabian culture.

The white marble is downright dazzling in the sun and should be an image of the paradise. It is one of the biggest mosque in the world. The 5,600 m² carpet weighs 47 tons and was made in Iran by 1,200 weavers. The huge chandelier consists of 2 mn Swarovski crystals from Germany is said to be the largest in the world.

We have selected the Baedeker Travel Guide for the United Arab Emirates since it was quite new and has short overviews of the regions and do not focus only on hotels.