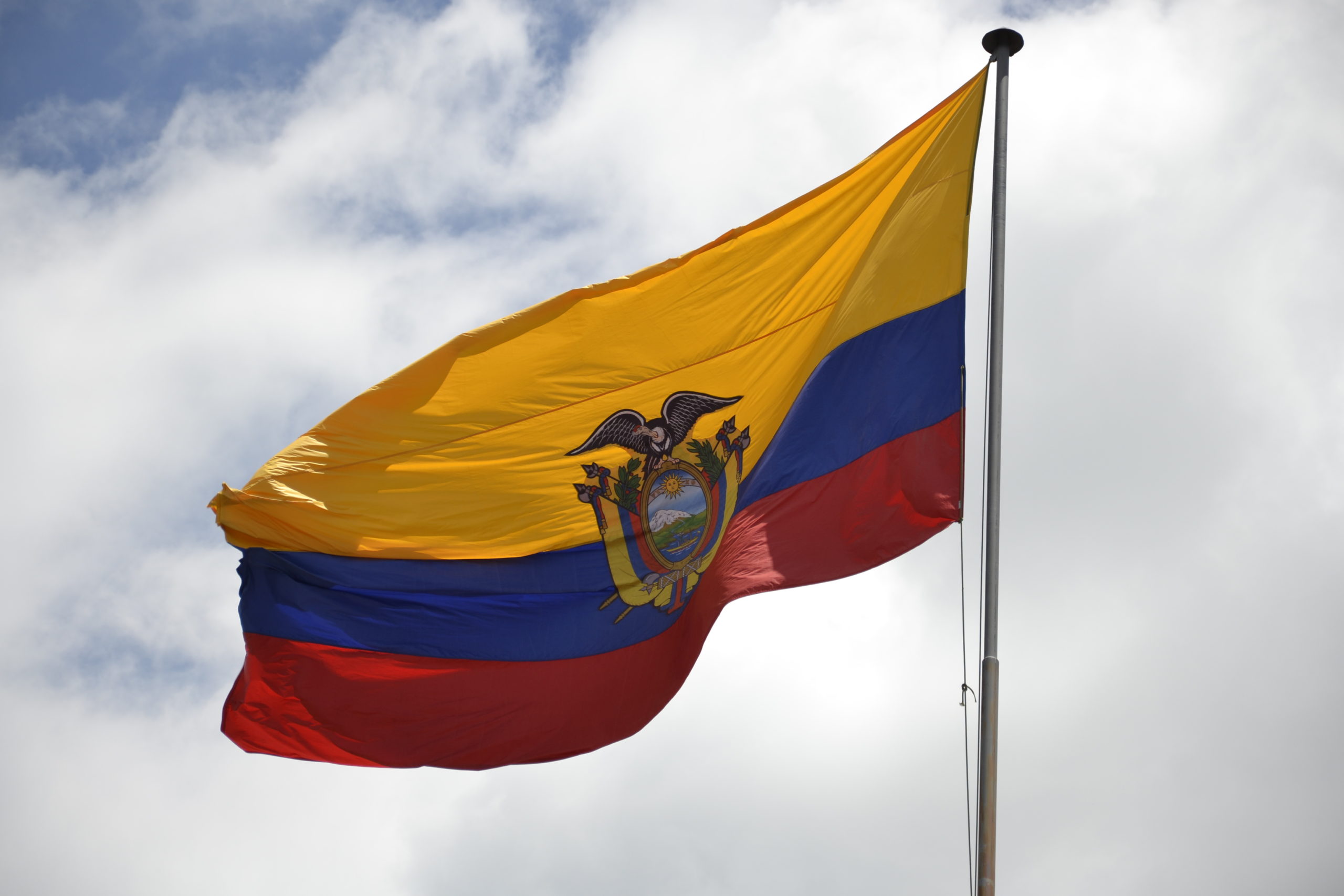 Our route through Ecuador

On August 11th 2016, we are flying from Panama City to Quito / Ecuador. During the last days staying in Panama City we planned the route across Ecuador and decided to take the Panamericana through the Andes with all the sights and national parks next to it. With Quito being 2.850 meters above sea level, Latacunga and Riobamba around 2.700 meters and Cuenca in the south with 2.500 meters, the eleven days we are staying in Ecuador will be a good altitude training for us. 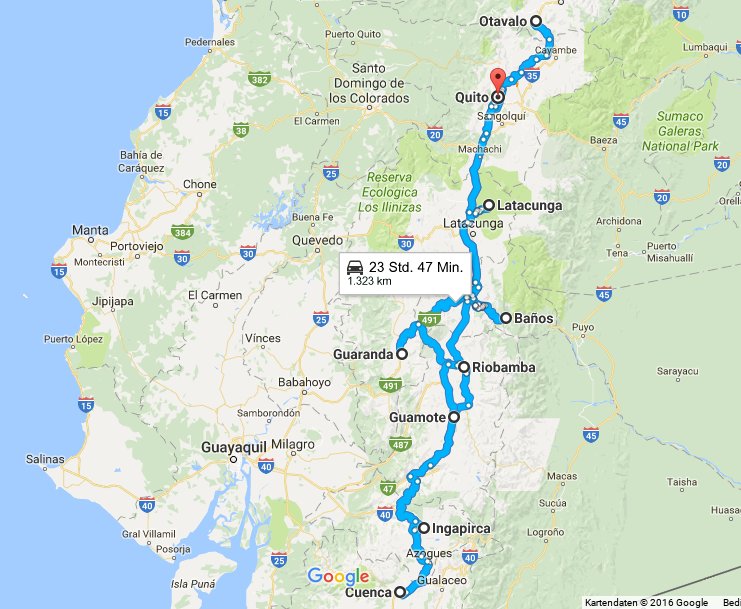 One of our mornings in Quito started with a surprise:

and then the adventure with our rental car company started: we suggested just to have a new replacement tire what they tried to do. But of course, they first had to analyse what was the issue with the broken tire. Then they recognised that they do not have an adequate replacement tire for us. This meant we had to change the car (of course after filling up the tank by ourselves) – but what they gave us was EXACTLY the same type of car with the same size of tires!!!! However, self driving is not an issue in Ecuador but you need to be patiened to get into the cities in the evenings.

On our first day in Ecuador, we visited Quito by a long and exhaustive walk through the historic center of Quito. Since not only Quito is on a high altitude but also in Quito itself it goes up and down everywhere the walk was very challenging for us… However, the climate is more comfortable compared to Panama due to the height.

Quito is the highest capital in the world and the first capital recognised as world heritage by the UNESCO. Quito is a beautiful city with many churches from the colonial area and many of them completely with gold leaf. In one of the churches we found a picture from the last Supper where a guinea pig was served.

To see the Virgin of Quito we walked up a hill where we had an amazing view over Quito. Besides the walking on the particular altitude also the “muchos perros” were a challenge for us.

As the name Ecuador suggests, the equator goes through the country: just around 30 kilometers in the north from Quito. 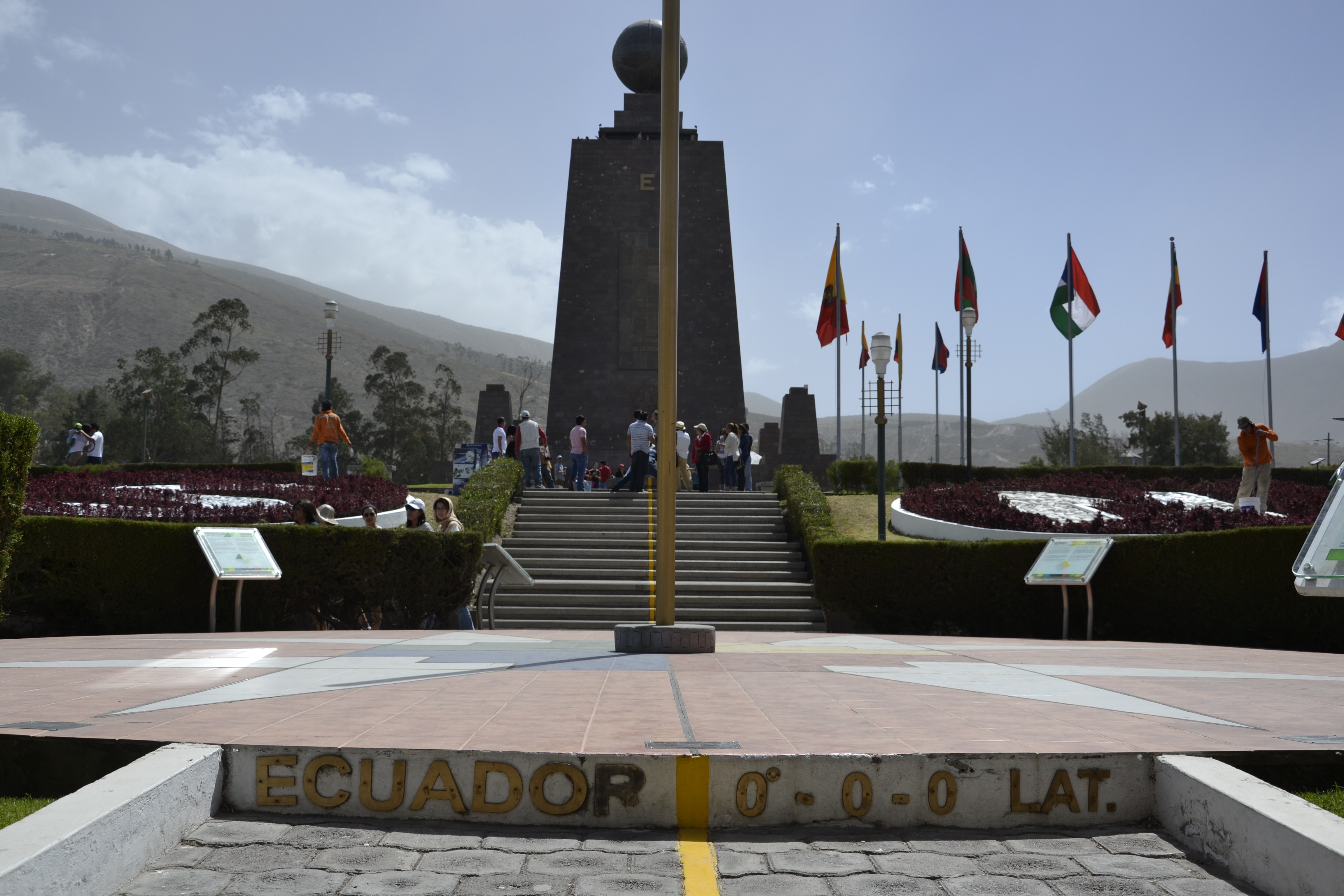 After spending 3.5 hours in the rental car company we started our trip to the south with  a stop at Cotopaxi volcano and spent the night in the small town Latacunga.

We would like to show you more pictures of Ecuador’s landscape however, we are not lucky with our rental car. After the issue with the tire yesterday, our car stopped suddenly in the middle of a road when we passed a small town. The nearest  service station was not able to fix the issue so we had to contact the rental company to organise a towing service. It ended up with six hours waiting for the towing service, driving to the service station, discussion with the rental company whether we get again a new car or repairing and in the end getting the broken fuel pump repaired. We arrived in our destination Riobamba without the sights planned for this day and after the sun went down already. So, we are keeping the fingers crossed that tomorrow is a day where we will not need to visit our rental car company 🙂

On our tour through the Andes we stopped in several cities, like Guamote, Alausi, Latacunga and Salina. All cities were surprisingly not that small and under-developed as we have expected. Especially almost all roads were paved and the Quito-Cuenca highway has three lanes with lights in the night. But most of the people on the countryside are still wearing the traditional clothes:

The southern end of our tour was Cuenca – a beautiful colonial city similar to Quito:

Cuenca is famous for the Panama hats that were invented and are still produced here. We tried some hats for several hundred dollars but (besides the cost) due to the many luggage we already have we decided not to buy another one.

We also found interesting traditions of eating in Ecuador:

The nature and the landscape with the vulcanos is amazing all over the Andes in Ecuador. In the national parks and on “normal” roads we were able to get quite close the vulcanos on high altitudes around 4.200 meters. 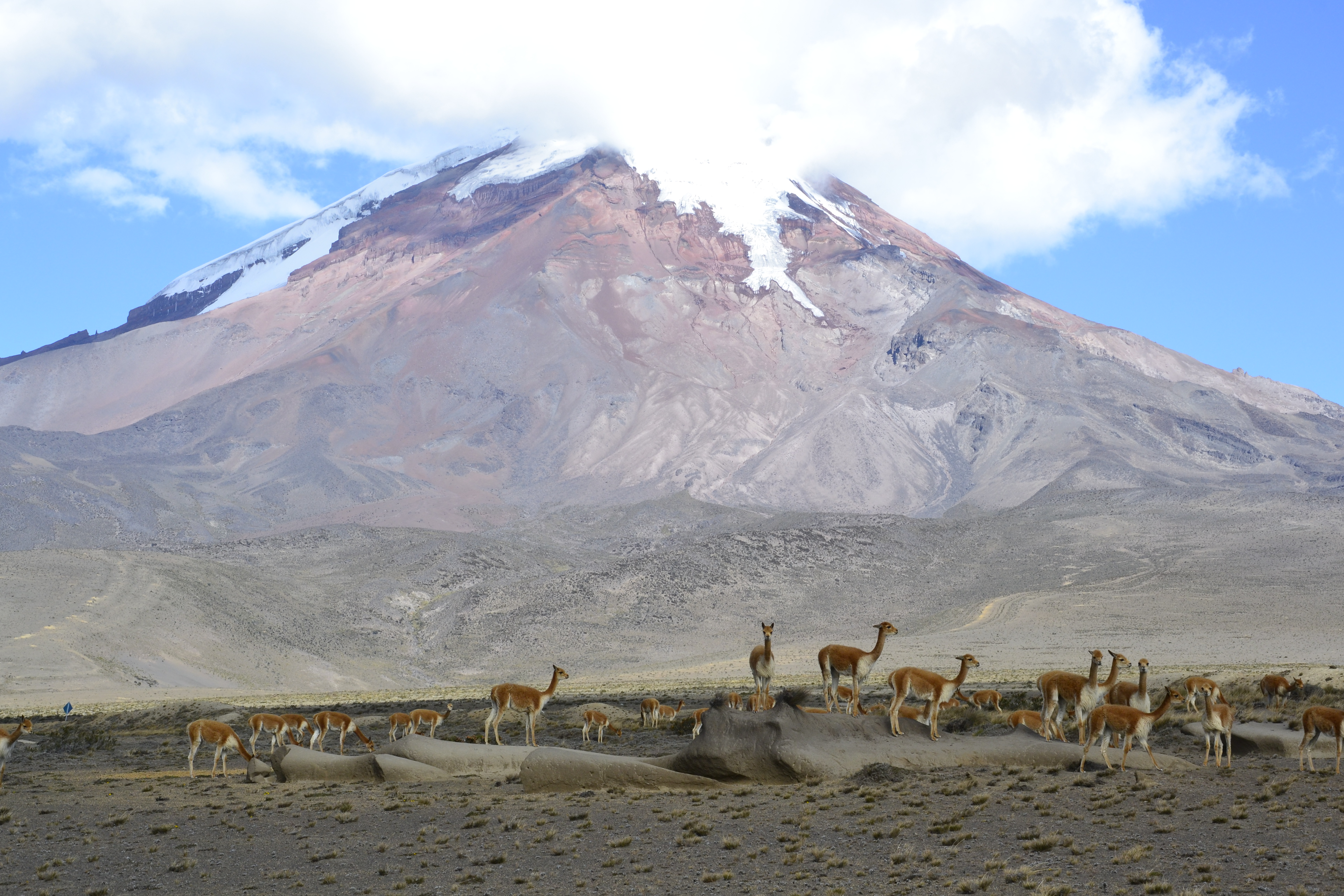 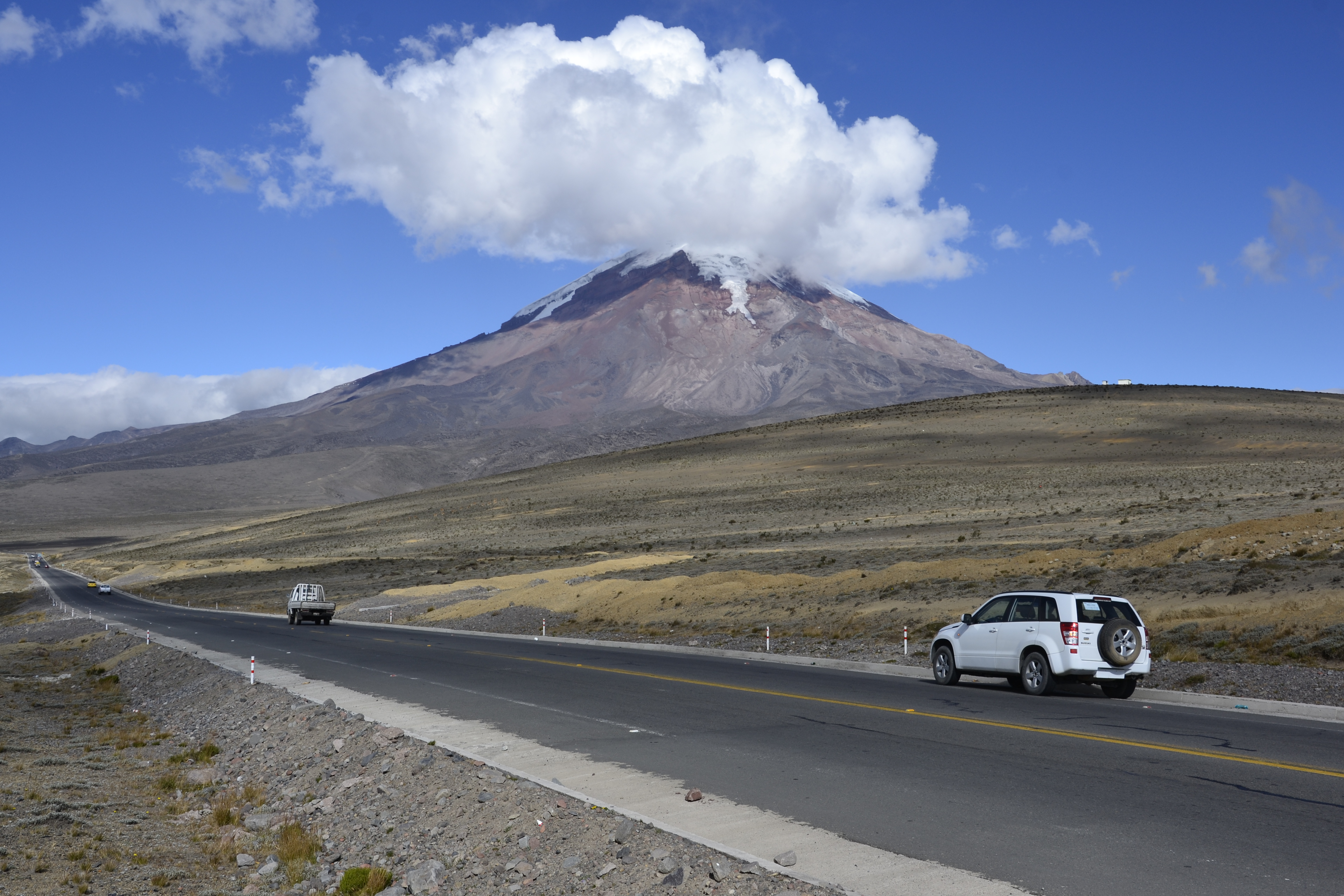 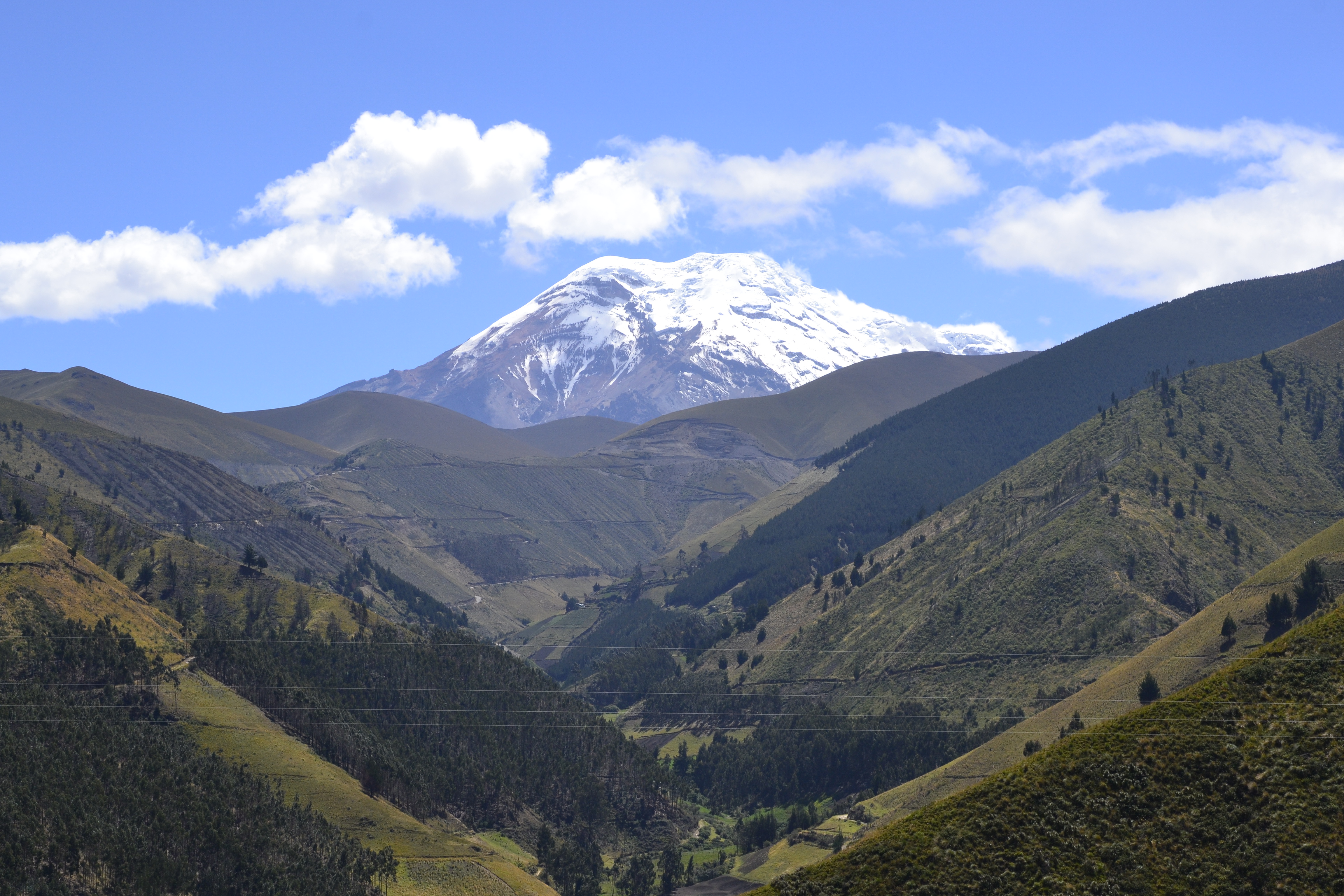 Let`s keep the fingers crossed that we have not violated traffic rules: