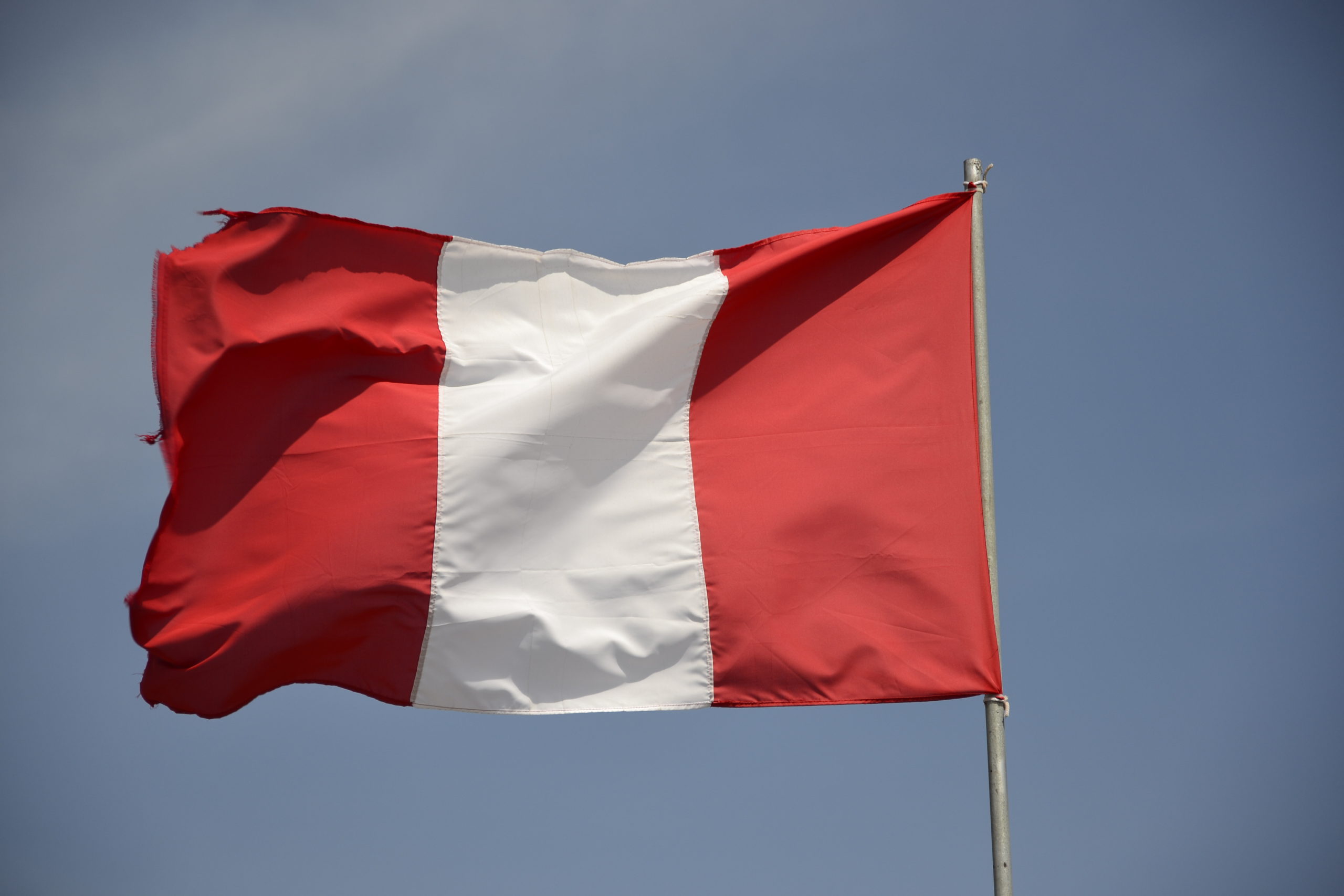 Flight from Quito to Lima

We arrived on the 22 August after a horrible flight in Lima. Horrible was not only the duration of the flight back to Panama City and then down again to Lima (distance Lima to Quito is around 160 km) but also the take-off in Quito with heavy turbulences where we were not sure whether the plane went up or down and screaming passengers like on a fun fair…

The first two days in Peru we spent on visiting Lima – a very huge city (like the state of Saarland in Germany) with approx. 9 million citizens what we especially experienced in plenty of overcrowded buses and on the masses on the streets. Lima is a very dry city directly at the coast with a historic center from the colonial era. Currently, the winter season is ongoing with cold nights and fog almost the whole day. But this did not prevent us from exploring Lima’s cultural and historic sights from the first civilizations.

Self driving in Peru

Going out of the city in the morning and coming back in the evening took us almost five hours in the traffic jams and with a lot of noise using the honk. We tried to identify when we have to use it. This is what we figured out:

Also similar to the other countries we have been is the long process of one hour of picking up the rental car. We have not yet identified the root cause but as soon as we know we will tell you. Interesting are the rental contracts in Spanish we have to sign. We have started learning Spanish in Panama but unfortunately we are not experts yet. Asking the rental car agents about the speed limits resulted in the following answers:

Our route through Peru on our around the world trip: 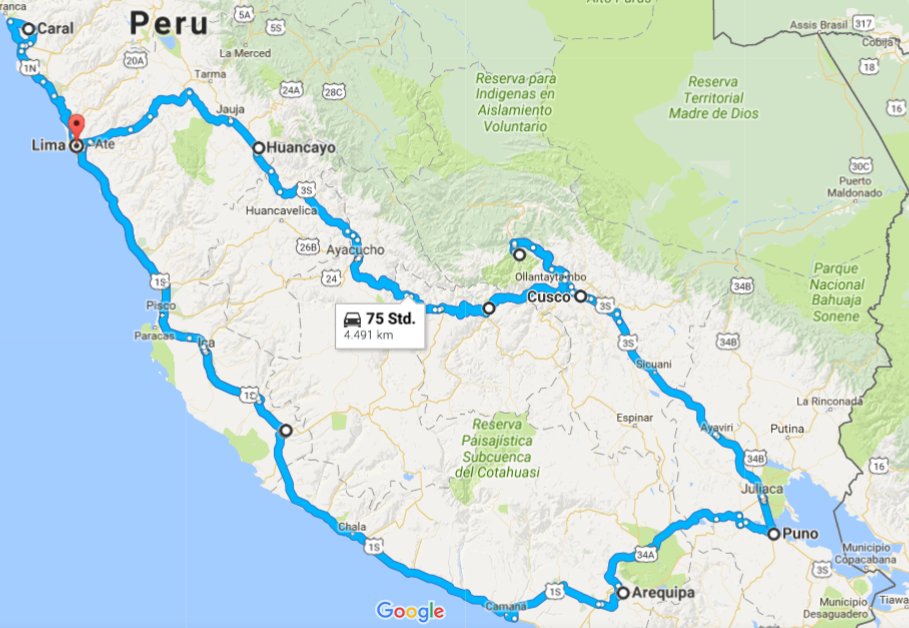 On our route we have been stopped several times by the police for control of driver license and car documents. It seems that we have something that makes us suspicious. One day, we forgot to turn on the lights of the car and they wanted to fine us around 10 dollars. But coming with them into their office and when we asked for an official invoice, they told us that we don’t need to pay and that we have to leave their office immediately. We didn’t understand why but are now checking the lights every morning carefully.

On or third day in Peru we left Lima to the north to visit Caral Supe – ruins from an around 4000 year old culture and the oldest city in Americas. Like we experienced already with other UNESCO world heritage sites, the challenge is to find them respectively the right way to get there. Our Garmin GPS system proposed unpaved roads but since we do not have an SUV this time, we decided to take a road that was marked as a main road in Garmin. However, after some kilometers on this main road the pavement ended. It seems we were crossing an industrial or archaeological area with barriers. The man at the barrier confirmed that this road leads to Caral Supe and opened the barrier. The road was getting worse and worse with huge stones on the road. Since I almost got sick due to the shakings of the car, I decided to leave the car and to run after it while Paul was driving. Half an hour before the site closes we arrived at Caral Supe – ready for the tour in pure Spanish through the ruines and the 200 km drive back to Lima in the darkness.

From Peru’s coast in the south we took a boat to the islands “Islas Ballestas” also know as Galapagos for the poor people. On this two hour boat trip we saw many animals we usually only see in the zoo like Humboldt penguins, pelicans and sea lions. More than 300.000 birds are living on these islands. On the islands one of the major products for Peru’s economy is produced: bird’s dropping called Guano. When Alexander von Humboldt identified that the Guano is thirty times more efficient than normal fertilizer, Spain tried to take control of the islands. This ended up in a war lasting for two ears – only because of Guano.

Peru has many different types of landscape, among those we haven’t expected a desert with very high sand dunes in the western part and the nice coast in the south.

We spent three days at the lake Titicaca – the highest lake with shipping traffic in the world. Despite our altitude training in Ecuador, we had to fight against the 3.900 meters above sea level of Titicaca. But we were not the only ones since on our boat trip on the lake almost everybody was sleeping after a short walk on some of the islands…

The floating Uros Islands are very impressive in the way how these islands are constructed and the people living there in communities of few families. The basis for the islands is a bigger kind of reed and has to be renewed every 50 days. Their houses and boats are also made of reed and they even eat it. Walking on the islands feels like in a waterbed. Unbelievable how they can live on these islands and in these houses during the very cold winters.

Our next stop was Taquile Island that is a natural island with only 7km2 and around 2200 people living on it but with beautiful original landscape. Parts of the landscape have been constructed by the Incas. This island is also famous for their knitting and weaving. But here this is the man’s job. 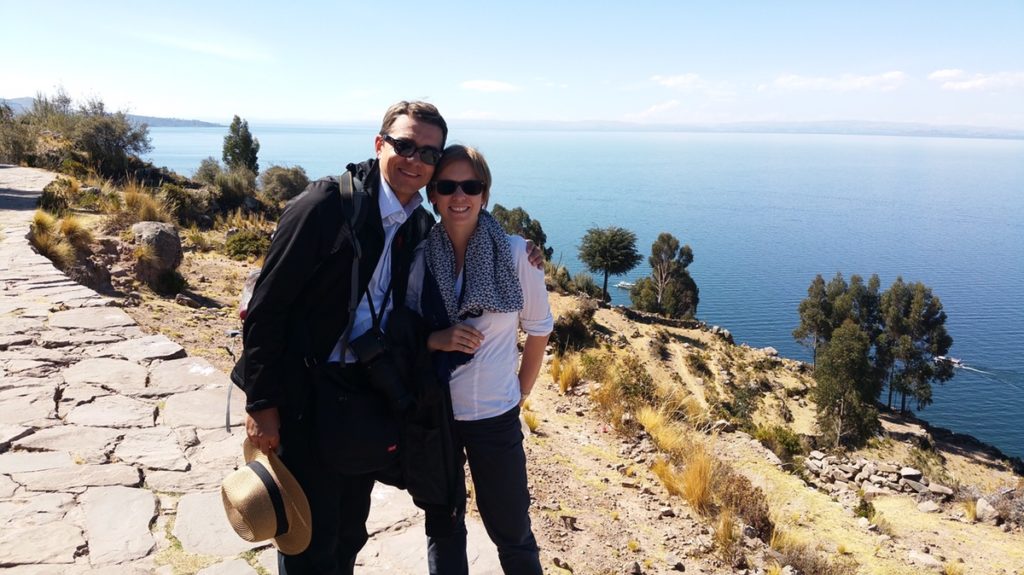 The ancient city and former Incas capital Cusco was one of our highlights on our trip. We could walk around in the city for a long time without getting bored.

And some pictures from the Inca ruines in the sacred valley around Cusco:

Our plan for Peru also included to visit Machu Picchu and therefore we bought tickets via the Internet since the number of tourists per day is limited. On our drive to Machu Picchu I read in the travel book that the city where our hotel is (Aguascalientes) and from where we wanted to walk the last eight kilometers uphill, is not connected via roads but only reachable by train (20 minutes) or by foot (2.5-3 hours). Calling the hotel they informed us that a train is leaving every hour from a valley closed to Aguascalientes. We arrived at the train station after a 20km drive on a gravel road, leaving the rental car and parts of our lagguage at a parking in a courtyard of a person standing at the entrance of the town and a 10 km drive in his approx 30 years old car on another gravel road. On the time schedule of the train there were only three trains per day but we still believed in what the hotel was telling us and that the train will come soon. We ended up with waiting for two hours. Then we learned in Aguascalientes that even Machu Picchu closes at 5pm the last bus to the site leaves at 3.30 pm. Unfortunately, we arrived at 4 pm and there was no chance to see Machu Picchu since also walking up would lasts 1.5 hours. Therefore, we cannot show you any fotos of Aguascalientes and the train:

After 18 days in Peru, our last days have come and we are driving from Cusco back to Lima through the Andes approx 1,200 km in three days. One of the highlights was the pass of 4,746 meters and the colorful highlands – of course also here Alpacas:

Thinking of our 19 days we spent in Peru it was a really nice time where we have seen a lot of different things starting from the chaotic city Lima, the desert around Ica, the many mountains we drove up and down to get up on the next one, the beautiful but touristic area around lake Titicaca and the sacred valley around Cusco with the Inca ruines and this beautiful city itself. Peru together with Ecuador and the wonderful landscape and the colonial cities Quito and Cusco were really amazing and we can highly recommend visiting both countries.