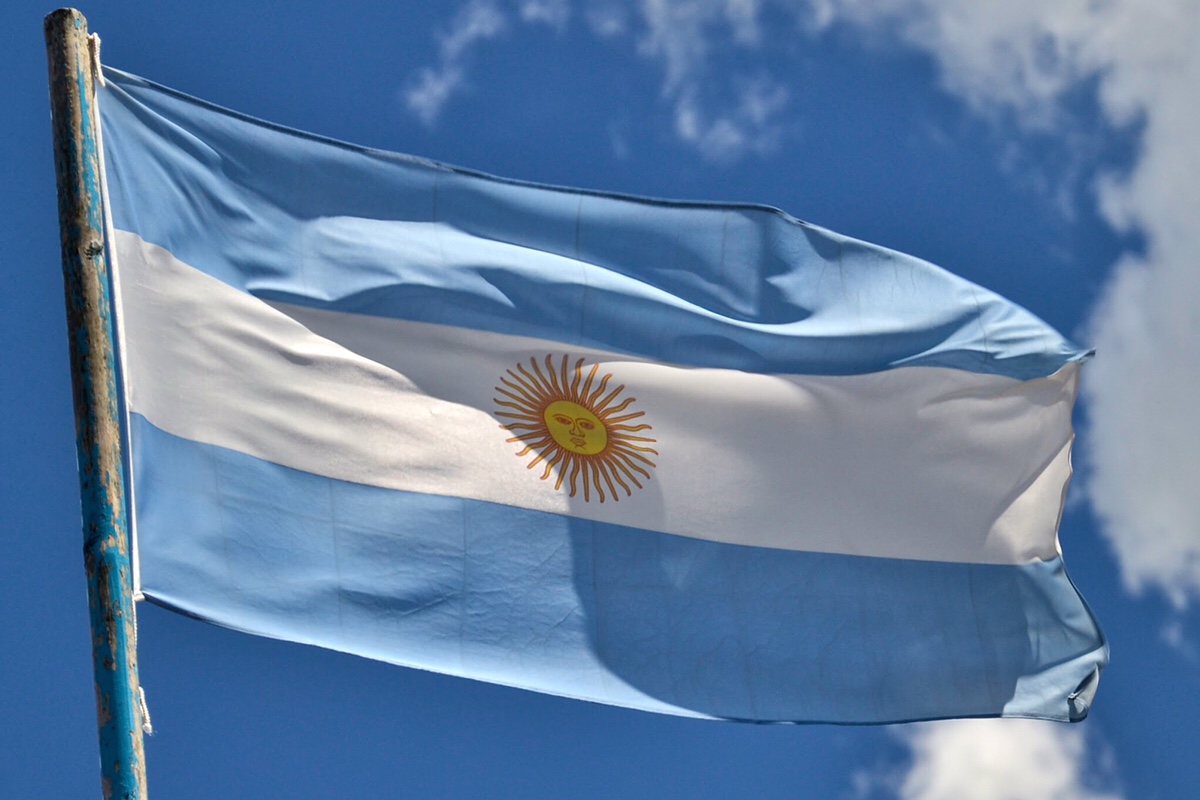 Back on the road!

After spending nine months at home and work, we are now back on the road again. Before our tour around the world we have not been to Latin America. But for this year-end break we decided to explore the North of Argentina and Uruguay for three weeks in total. Discover with us our travel adventures across Argentina & Uruguay and get top travel and food tips including Buenos Aires, Córdoba, Tafí del Valle, Salta, Iguazú waterfalls, Montevideo and Colonia del Sacramento but also six UNESCO world heritage sites.

From Frankfurt, Germany we took a direct flight to Buenos Aires. It is one of the longest flights for Lufthansa with around 14 hours but very pleasant overnight flight.

Experience of self-driving in Argentina and Uruguay

We expect good road conditions in Argentina and Uruguay, so we are in a positive mood with the planned 6,000 km for the whole trip and believe we can manage our trip for the planned 18 days. Driving through Argentina the roads are not very crowded except for trucks so driving is in total a very convenient way of travel. Passing the Pampa, we had for approx. 30 kilometers more holes in the road than real road but the rest was completely fine. 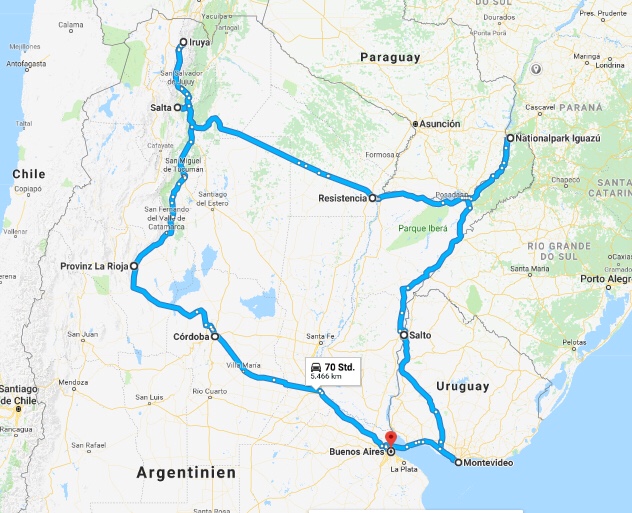 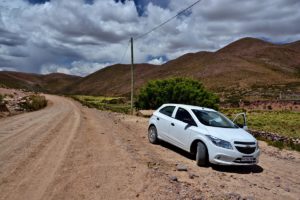 The first day was busy with getting some sleep after the 14 hours flight from Frankfurt and organizing our rental car and the permission to cross the border to Uruguay with the rental car. The permission takes some days of preparation and despite asking to prepare it in advance, it was not ready when we arrived at the rental station. So, we agreed with the rental car company that they will send it to the rental car station at Salta airport in the North of Argentina where we can pick it up. Let’s keep the fingers crossed that it will arrive there… We have rented the car at Europcar and the Chevrolet we got was really good and we able to do the whole trip without any technical issues despite the extreme temperatures and the long drives per day.

Things to discover in Argentina – Our travel tips

Our first stop being back on the road was San Antonio – a cosy town on the route between Buenos Aires and Córdoba. The architecture of the houses is from the colonial time.

On the same day we continued our travel to Córdoba what is approx. 700 km from Buenos Aires. This was the first time we experienced what “Pampa” really means: the environment did not really change at all during this trip and we just saw green fields, green fields and green fields. Córdoba is a mixture of old and new buildings with an unbelievable number of shoe stores next to each other.

We spent New Year’s Eve in the mountains on 2,100 meters in Tafí del Valle with completely different weather conditions compared to the 35 degrees Celsius in Buenos Aires and Córdoba.

We tried to reach the village Iruya in the mountains by crossing a mountain pass but the road conditions were not the best for our car so that we had to turn around after spending one hour for 20 kilometers. Due to its importance as a major trading trade route over the last 10,000 years, the valley of Quebrada de Humahuaca has been declared by the UNESCO as a world heritage site.

A lot of architecture from the colonial time as well as colorful churches can be found in Salta. We arrived in Salta for the first time on January 1st and the city looked like extinct – the same picture we get every time when we visit a city in the afternoon: almost every shop is closed for fiesta.

From the western part of Argentina we continued towards the more eastern parts around Corrientes. From Salta, this meant 815 kilometers straight through Argentina’s Pampa. We had to stop every 250 kilometers to cool down the car since the temperature increased to 35 degrees Celsius after leaving the mountain area. But now, we know what Pampa really means, we saw the whole eleven hours in the car the following picture outside. At least, the roads were pretty good except for one part of 30 kilometers where we had more holes than paved street. 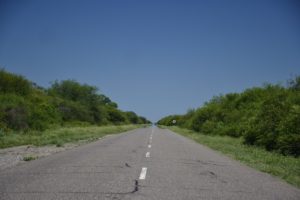 The first Jesuit missions in the triangle of Argentina, Paraguay and Brasilia were established around 1618 on the countryside of the Guarani indigenous communities. Since they were recognized as threats for the Spanish crown, all were destroyed during the colonial era. The ruins of Ignazio Mini, Santa Ana and Santa Maria are located deep in the jungle. Each of the impressive remains is characterized by a specific layout and a different state of conservation. For their protection, UNESCO declared the Jesuit missions as part of the world heritage, officially known as Jesuit Missions of the Guaranis.

The Iguazú waterfalls at the border to Brasília are very impressive and consists of hundreds of smaller waterfalls along a rout of approx. 3 kilometers. The huge amount and the power of the water as well as the loudness the water creates is incredible. We only had one day in the Iguazu National Park (being on the last of the UNESCO world heritage sites) and therefore, only visited the Argentinian side where according to the guidebook you can get closer to the waterfalls. How close we could get, we really experienced at the end of our circuits around the falls when we were completely wet.

What to see and do in Buenos Aires – our travel tips

La Boca is famous for the colorful houses and the pedestrian zone „El Caminito“ with a lot of shops and restaurants. In this area a lot of Spanish and Italian immigrants are living here. It is said that the houses are so colorful because the remaining color from the renovation of the working equipment has been taken for the houses. However, do remind not to leave the touristic paths around the pedestrian zone and until the bridge due to the dangerous zones around. To get to La Boca you can take a bus during the day. As mentioned above, it is better to take a taxi by night.

Plaza de Mayo that is surrounded by the Cathedral of Buenos Aires, Casa Rosada (the Argentinean Presidential palace) and the town hall is the heart of the Buenos Aires. In the center an obelisk called Pirámide de Mayo is located since the first year of Argentina’s independence from Spain. There are two legends about the color of Casa Rosada: either it is due to the mixture of the colors of two parties (red from the federalists and white from the Uniterian) or from the cattle blood. The most important Cathedral is the Cathedral Metropolitana from 1827.

You can spend hours just walking around and being impressed by the extraordinary mausoleums and uncountable statues. Unfortunately, we only can share two small pictures since due to the heavy rain. 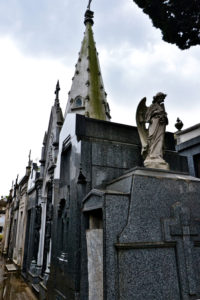 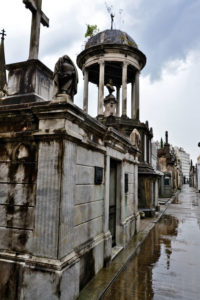 Puerto Madero is a rather modern area with quite expensive restaurants and bars. However, walking along the river is a cooling experience in the high temperature. 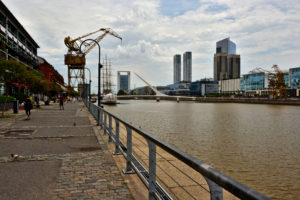 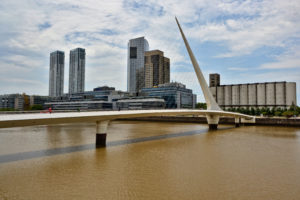 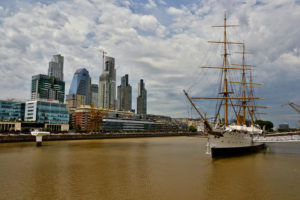 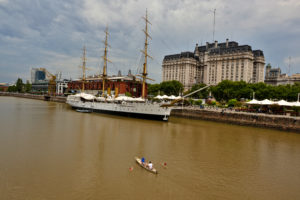 Tango dancers are all around in Buenos Aires – enjoy watching and also give it a try! It makes so much fun.

Things to discover in Uruguay – our travel tips

Passing the border at Concordia / Salto to Uruguay with the rental car was very easy and just last a couple of minutes. Just before crossing the border we have discovered a “typical German shop”:

Salto is the third biggest city in Uruguay with colonial architecture from the 19th century.

The area around Mercedes is the center for cattle trade. The Liebig extract of meat Company opened their first factory in South America close to the town Fray Bentos. Its factory is nowadays a museum that is registered as an UNESCO World Heritage (official name: Fray Bentos Industrial Landscape). Before the second World War 4,000 employees have slaughtered 200 cattles per day. Unbelievable number! But the most important product was the OXO stock cube. The factory was closed in 1979 however, the offices are in original condition.

Montevideo is a very relaxing and calm capital – maybe the calmest one we have visited so far. The most sights can be discovered by foot.

Montevideo’s landmark is the Palacio Salvo that was with its 26 levels the highest building of South America in 1927. You can visit the inside of the Palacio Salvo. From the Plaza Independencia you have the best view on the Palacio. The horseman statue with its 17 meters Artigas is a national hero. His mausoleum is below the Plaza and guarded by soldiers.

Walking through the city gate we have entered the old town (Ciudad Vieja) with a lot of small restaurants and shops.

Following the streets lead to one of our highlights in Montevideo: Puerto Mercado

After this lovely lunch the La Rambla on the riverside was exactly what we needed to digest the steak.

Heading back to Argentina we stopped for a sightseeing walk through the historical quarter of the city of Colonia del Sacramento. Colonia is recognized as UNESCO World Heritage due to the picturesque village with small streets with cobblestone pavements.

To get back to Buenos Aires we have decided to take the ferry.

We took the chance in directly at the beginning of our trip in San Antonia to have lunch in a typical Argentinian restaurant called Parilla (grill) – of course with an Argentinian red wine. And of course several time during our trip.

Due to the very delicious meat we only tried Argentinian empanadas as a snack.

The national drink in Argentinia is mate tea. And Argentina will remain in our minds always as the country of the thermos jugs. Never seen so many people carrying a thermos jug around the city – together with the traditional cup for mate tee. We also tried it in a traditional cafe in Córdoba.

To plan our travel, we have used this time the lonely planet travel guide. The one for Argentina also includes the main sights from Uruguay. In total we were very happy with this guide.

To enjoy the Mate tea also at home we buy from time to time Argentinian Mate Tea. Don’t forget the sugar to have the same smooth taste like in Argentina 🙂