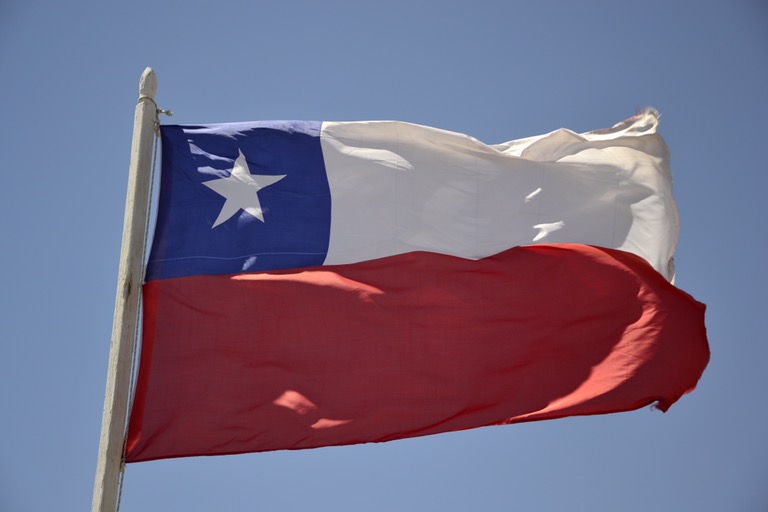 An overview of our route through Chile – details are shown in the following maps below:

Our first stop in Chile was the Easter Island. A magical island with the famous statues made of stone (called Moais) that is about 3.700 km away from Chile’s mainland and around 4.000 km from the next bigger island. From a geographical point of view, Rapa Nui (original name of Easter Island) belongs to Polynesia but as a territory it was annexed by Chile in 1888. It is almost in the middle of nowhere but a very nice and interesting part of the world. The island with the only one city “Hanga Roa” looks like a triangle with a length of 24 km and width of 12 km.

The Moais are made of stone from a volcano, all having big heads, long noses and ears and looking almost the same but differing in size from two to almost ten meters. They are spread at different places all over the island like an open-air museum.

After long days sitting in cars on our tour so far, we decided to rent bikes for the two full days we stayed on the Easter Island. Starting from Hanga Roa, we started our tour of about 60 km with hiking up the hill in the south to Orongo where ancient houses from the Rapa Nuis are shown. After that we cycled along the whole coast in the south to Rano Raraku – the volcano from which the stone for the Moais was taken. In this area, Moais in different production status can be visited. Amazing how the Maois have been transported to the  coast in the time of 1100 AC – different theories exist from transporting with wooden sleighs to walking tied with slopes.

We only stayed three days on the Easter Island with every day totally different wheather:

Due to the rain on our second day, we had to rent a car again to see the residual parts of the island.

The region in the north remembered us of the southern parts of Bolivia and Peru due to the high mountains, the salt desert and the sand dunes in the Atacama desert. The main city in the Atacama desert is San Pedro with only mud brig houses but hundreds of tourists surrounded by 5,000 to 6,000 m high volcanoes. As the name suggests, in the “Valle de la luna” it looks like on the moon. The white spots on the picture is salt. This area is very dry and hot during the day with very cold nights. Therefore, no vegetation is able to survive here.

We have never seen so many houses with national flags on residential houses like in Chile: 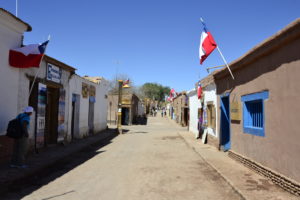 We continued our tour to the coast in the north of Chile with the destination Iquique. It was absolutely surreal driving on the relatively flat section at the end of the Andes mountains after the twisting roads in Peru. We really enjoyed the straight road with good views of the opposing traffic  and hardly any intersections.

Iquique surprised us with the skyscrapers – and it looks a bit like our home Frankfurt. Iquique with its port was very important during the time of saltpeter and the houses built between 1880 and 1930 have been maintained. 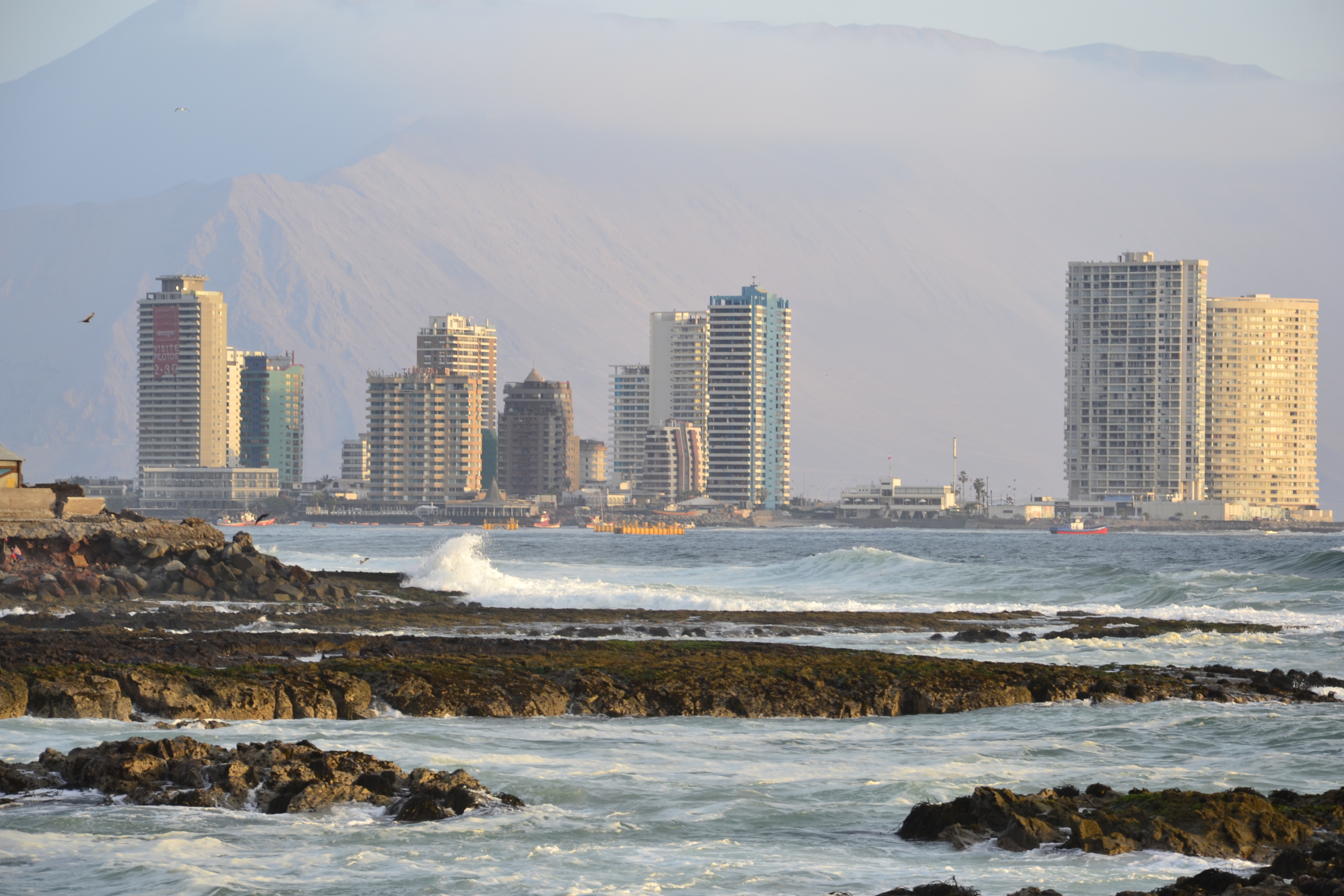 Around 40 km from Iquique, the UNESCO ghost towns Santa Laura and Humberstone were on our agenda. Both towns give an impression how life was when working in saltpeter mines and living next to it. The towns have been completely abandoned in 1960 after the saltpeter mining was not profitable anymore as the synthetic production increased. During our visit we could still smell the saltpeter in the air.

Central Chile is famous for its wineries, street art and beaches. Chile is one of the sixth biggest wine producing country and also rare grapes are growing here. Valparaiso, the colorful and chaotic city with its hills, is only around 100 km from Santiago at the western coast. We have never seen so many stairs within a city. The elevators to facilitate climbing up the hills are recognized as UNESCO world heritage and are from the time between 1883 and 1916 whereof some of them are still in use. Widespread in the city colorful and nice paintings at the houses can be seen. The houses themselves are quite old but wonderfully maintained. We stayed two days in Valparaiso in a house that is 127 years old and also some furniture looked like in a museum.

The Colchagua Valley in Central Chile is one of Chile’s best known wine regions. Located 130 km southwest of Santiago, the vineyards are naturally protected by the Andes Mountain Range to the east and the Coastal Mountain Range to the west. This constellation with quite dry all over the year, winds from the Andes and the maritime climate provides optimal conditions for growing the grapes. We made a guided tour (http://www.naturalwinetours.com/en/) through the winery Montgras which has received many awards for its Carmenère, Syrah, Malbec and Cabernet Sauvignon wine. Especially, the Carmenère is a typical Chilean wine which is mainly growing here due to the conditions mentioned above. We started our tour with a mountain bike tour through the vineyard and a visit of the manufacturing center including tanks with several ground liters of wine and ended with a tasting of different wines together with the experiment how the wine tastes vary when eating cheese or sausages in parallel. It was an interesting and amazing tour and a special thanks to our wonderful guide Gonzalo the co-founder of Natural Wine Tasting who explained us everything in English, let us try the wine directly from the tank and made this visit a special event we will definitively not forget on our trip around the world. We will try to get the wine when back at home since it seems that the German importer is selling the wine from this winery to REWE.

In Central Chile we almost felt like being at home with the green fields and forest next to the two lanes highway in a very good condition without the curves we used to had in Bolivia and Peru. In addition, this is the area where a lot of former Germans are living due to a population project by Chile at the end of 18th century. And in recent times some Germans started microbreweries with Bavarian beer and food what we had to taste of course.

The next destination in Chile was the biggest island or better group of islands Chiloe with its wooden churches all over the islands. Besides the airplane we used to get to the north of Chile and our rental car we used ferries to get to the islands. The islands are with 9,322 km2 and 150,000 residents much bigger than the Easter Island.

16 out of the over 150 wooden churches from the 17th and 18th centuries are recognized as world heritage by the UNESCO. The outer walls are covered with colorful wooden shingles and also the interior is completely made of wood.

We spent 1.5 days on ferries and in the car (including a night) to visit the North Patagonia. Amazing and mainly untouched landscape. We have not expected to see such a green landscape with so many trees and fern. Parts of the Carretera Austral are paved but we had some challenging sections where we struggled to get through with our small car that we have in Chile – especially due to the heavy rain showers we had during the time. We have not seen a gas station and the ports for the ferries are just the end of the road without nothing else. 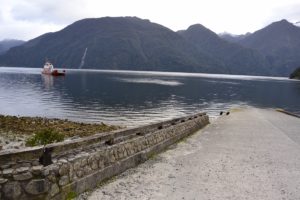 Our tour through the Central and the Southern regions of Chile 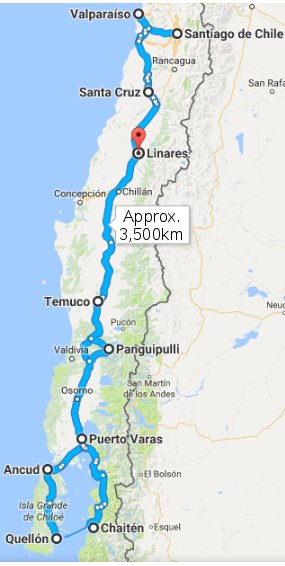 Back in Chile’s “small South” we started our way back to Santiago (around 1,050 km) and visited in more towns, especially Puerto Vargas and Puerto Octay that were characterized by Germans. Besides the plan from Chile to populate the sparsely populated regions to protect them against acquisition, the immigration process of Germans was started by two brethren from Rotenburg an der Fulda in Heese. They bought one region in 1845 and brought nine families of handicraftman in the next three years. Based on the promised advantages of several years not paying taxes and parts of the countryside and the advertisement for Chile, the brethren could win around 600 people more until 1851 for the immigration to Chile.  The oldest German school in Latinamerica was founded in Osorno (see above) in 1854. Until 1870 approx. 6,000 Germans were immigrated to Chile and settled mainly in the region around Osorno and Validivia. No wonder that we found a cafe with the name “Hessendorf“.

We spent five days in Santiago de Chile – which are our last days in Chile after three weeks and at the same time our last days in South America before we are changing the side of the world to New Zealand. Buildings from the colonial area like in other capitals in Latin America are rare due to the many earth quakes and the economic wealth Santiago achieved only after the independence of Spain.

Due to the long coast fish and sea food is very typical for the Chilean cuisine. In Santiago, the “Mercado central” is a fish market together with restaurants. Some of the fishes especially the crabs were still alive.